Snow in Florida – A Weather Fluke, or Part of a Pattern? Recently, snow fell in Florida, Texas and other parts of the South, with Tallahassee weather forecasters noting about 0.1” of the white stuff. In Florida’s instance, it was the first time snow has fallen in the state in about 30 years, as temperatures in Florida seldom drop to a point where snow is even possible. Is this an oddity, or is it part of a pattern of disrupted weather around the country?

It’s a common misconception that “climate change” or “global warming” means that weather will be consistently getting warmer in every part of the country.

Part of the reason that researchers have changed the terminology to “climate change” is that they see it as just that – changes in patterns of temperatures, rainfall and overall weather conditions that haven’t been seen before. There are actually several reasons why unusual snowfalls, cold Florida temperatures and cold snaps don’t disprove climate change. 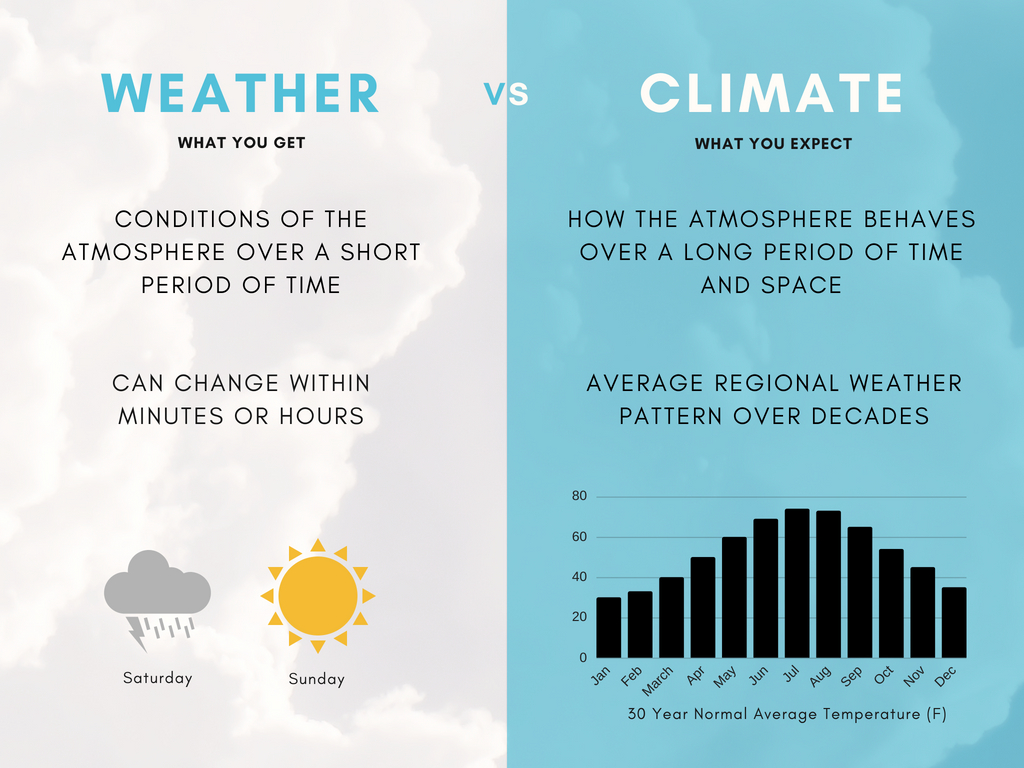 Weather is the term for changes in temperature patterns or rainfall that are short-term. Weather events change by the week, by the day, by the hour and by the minute. Most weather events take place in the atmosphere’s lowest level, the troposphere (which is below the stratosphere). In addition, weather is regional in nature and is driven by changes in moisture, air pressure and temperature from one place to another.

Climate, on the other hand, refers to long-term statistics of weather patterns. It takes into account wind, precipitation, temperature, humidity, atmospheric pressure and other meteorological data in a given area on a year-to-year basis. Researchers have developed climate models to study interactions of the atmosphere, oceans, polar icecaps or glaciers and land surface. Climate models are then used to develop long-range projections of future climate conditions.

It’s understandable, though, that the variables in day-to-day weather make it difficult to grasp long-term patterns in climate that have been happening over the past several decades. Research, however, points to greenhouse gases as having a great influence on extreme temperature events and changing short-term patterns in weather.

But Why Snow in Florida? The snow that fell in Florida in January, 2018 was part of the larger “bomb cyclone” weather pattern that hit most of the East Coast and seaboard with snow and frigid temperatures. The term “bomb cyclone” refers to a drastic drop in atmospheric pressure, with the barometer dropping at least 24 millibars in 24 hours so that the storm pattern “explodes” in strength.

A mass of cold air typically spins around the North Pole in winter months, and this polar vortex can be carried south by the jet stream when conditions are right. When this happens, troughs of low atmospheric pressure will occur – and if the system makes as far as warm Gulf Stream air, it will result in an enhanced pressure drop and winds that spin toward the low-pressure center of the system. In the dead of winter, that can mean blizzard conditions that can cover a wide area.

While climate change skeptics love to point to an example like recent snows in Florida as disproving climate change, these changes may be more common even with warming temperatures overall. Changes in Arctic weather patterns could mean more polar air will “spill” southward, and cold air (being heavier, of course) making its way into lower altitudes in the atmosphere.

Other Impacts of Climate Change

As regional weather patterns change and become more unpredictable, people are likely to see climate change manifest itself in many various ways – some direct, some less so.

Food pricing may increase or decrease on certain items as climate change has an impact on farming and agricultural production around the country and the world. Snow and cold temperatures may become more frequent in places like Florida and the South (with ruined citrus crops), while other areas may see warmer winter temperatures.

Record high temperatures in summertime will plague many parts of the country, and droughts may lead to more wildfires and crop failures. In other parts of the country, relentless rains may lead to floods and mudslides. Rising sea levels may threaten to swamp low-lying areas in Louisiana, Florida or along the Gulf Coast in Texas, and extreme hurricanes like Rita may become more commonplace. Plant and animal territories have already shifted, and many researchers have noted trees and other plant life blooming earlier in the year.

Regardless, researchers stress that it’s important to look at long-term trends over a period of years, rather than focusing on short-term weather events such as a Florida snow. It’s all just something to consider when you’re watching the weather on TV and wondering, “will it snow?”