Parana River: Its Importance and Its Threats In South-Central America, there runs a river called Parana River. This river goes through Brazil, Paraguay, and Argentina over a length of 2,570 kilometers, making it the second largest river in South America, next to the Amazon River.

The Parana provides a huge watershed which spreads all throughout the South-Central area of the continent, surrounding all of Paraguay, a lot of the southernmost area of Brazil, northern Argentina, and touching into Bolivia.

The Parana River, or Rio Parana, is made of a delta that is 32 kilometers of forested marshland, located northeast area of Buenos Aires in Argentina.

It is also home to the world’s second largest waterfall, Iguazu Galls and the largest wetland, the Pantanal.

This river is in junction with the Paraguay River. At this point in the Parana River map, it’s known as the Alto (Upper) Parana.

This river is not only vast and far-reaching, but it holds many benefits, and faces many threats.

The Importance of the Parana River on South America

As mentioned earlier, the lower area of the river is connected by the Paraguay and Uruguay rivers. This combination of rivers forms La Plata River.

La Plata River Basin helps drain a fifth of the South American Continent and the whole area is known for its incredible freshwater biodiversity. This river is a main source of water, energy, and food for millions of South Americans. Moreover, the largest cities on the continent are based within this watershed.

One of the largest dams in the world, the Itaipu Dam is found on the river near the border between Paraguay and Brazil. Over 90% of Brazil’s energy comes from hydropower – the majority of which comes from dams on the Parana River.

Much of the Parana is navigable and is used as a vital waterway to link inland cities within Paraguay and Argentina to the ocean which then provides ports in many of these cities.

Downstream, many locals depend on the river for drinking water.

Current Threats to The Parana River

With a significant amount of importance and pressure comes many threats and implications facing the Parana River.

The most important asset of this river remains to be the biodiversity – what it provides for animals and plants that in turn, help humans sustain themselves.

Another important asset of this river is the fresh, clean water it provides.

The Parana river has an abundance of water streaming through it, being the second-largest river system. With all this abundance, you’d think it would be difficult for the river to run out of clean and fresh water. However, due to the amount of alterations and construction on the river, by ways of dams, deforestation, and sedimentation, the Parana River is under serious threat – which is a threat to the plant, animal, and human life it nourishes.

The continent depends on the river for farming water, biodiversity, and for indigenous communities – a home and a primary source of livelihood.

In terms of farming water, Sao Paulo supports a growing population with limited water resources. The watershed within Parana River basin provides half of the farming and drinking water for the metropolitan area’s 18 million residents.

However, the pollution, deforestation, and sedimentation have threatened the supply dramatically. This pollution has specifically forced the government to chemically treat the water for the residents in the area. This percentage of chemically-treated water has been raised to 51% in the last five years.

The Future of the Parana River

While construction, pollution, sedimentation, and deforestation are major threats to the Parana River, a future of climate change doesn’t help the situation, either.

While some areas of the Parana River cause flooding due to dams, other areas remain drier than before. The more our climate begins to warm, the more drastic these differences will be due to influxes in precipitation in accordance with a humid atmosphere.

On top of that, development around the Paraguay river system is gaining speed with infrastructure and agriculture projects set up for the upcoming years. Over half of the Cerrado grasslands in Brazil have been turned into areas for agriculture and ranching – industries that have caused a large portion of the pollution run-off and soil erosion in the past. 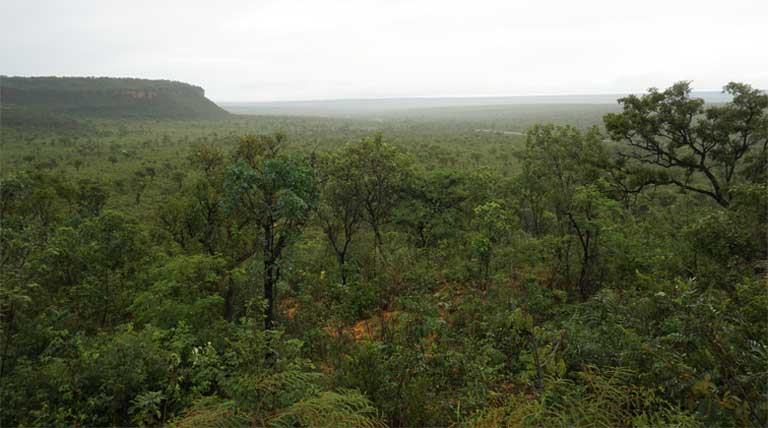 A view of the Cerrado savannah and plateau tablelands. Photo by Alicia Prager

What does this mean?

Less biodiversity and more deforestation increase the effects of global warming, which in turn creates an imbalance in water cycle distribution. This will further complicate the issues the Parana River and its inhabitants face.

While this seems like a South American problem, it isn’t.

Climate change and its wide-reaching consequences affect us all – which means we’re all in this together.